My brother Mikey and I have teamed forces again to create ‘The Last Expedition’ a text adventure game set in a frozen, dystopian future. Well, Mikey built it, wrote the story and composed the music for it, I just created the background art! It’s a work in progress (so a few bugs and unfinished sections) but I was excited to share how it’s come together…

Inspired in part by the Global Seed Vault in Svalbard and Arctic exploration, the story asks you to follow in the footsteps of a young, female explorer who has ventured onto the frozen wastes in hope of finding the now mythical landmark. As the adventure unfolds you are presented with choices about which icy paths to take, faced with decisions to make camp or push on risking frostbite and given the opportunity to investigate long forgotten structures.

Created during lockdown for Mikey’s final University project, it brought us closer together at a time when geographically we were quite far apart. Looking back at that time now, I realise just how special it was. We checked in on Skype every morning to discuss next steps for his compositions or coding. Briefly catching up on the news before checking our schedules and planning his deadlines. It gave me structure and emotional support in the midst of all that fear and uncertainty. Plus it was the most time we’d spent ‘together’ in years.

Though the game is a work in progress that we would both like to develop further – I’m very proud of what we achieved so far. You can listen to the entire soundtrack on Mikey’s Soundcloud page too, but here’s a taster from the Archive Facility…

If you like mystery, dystopian futures and ice, check it out! You can play The Last Expedition on Share My Game here. Don’t forget to wear headphones!

Today I thought I’d share a little snapshot of one of my digital design projects – Secret Life of Boys, an interactive comedy for CBBC. I had an absolute blast working on three series of the show with our amazing digital team. As lead designer I was responsible for creating the user experience, interfaces, environment art – plus lots of fun graphic illustrations for game objects like stickers and secret treasure chests!

In the interactive version of the show, players can watch episodes, hunt for secrets, trigger bonus animations, stories and gags and explore the surreal, slightly magical world in which the characters live. Above and below are examples of some of the game screens along with an early wireframe.

Wireframes are almost like a blueprint for a game or digital experience. They help you to work out the best possible experience for a player, and take place before any visual design happens. Investing time on these at the start of a digital project can save a lot of time and effort down the line!…

I’ll share a bit more on this project in the future, but just wanted to let my games design flag fly a little today! Also, for any parents looking for something to keep the young ones entertained, I wanted to give Secret Life of Boys 3 a shout as a really lovely, fun series.

For many years I’ve been keen to try Dungeons & Dragons.  As a gamer and fantasy lover I suspected it would be something I’d get on well with and its appearances in Stranger Things and before that The IT Crowd, spurred my intrigue further. However, although I’d been invited to join a few campaigns, it wasn’t until lockdown that I was finally able to make the time to play. In March, when a friend asked if I’d like to join their new online campaign (and my calendar was suddenly devoid of all weddings, birthdays and anything that would stop me from saying yes) I decided to go for it! 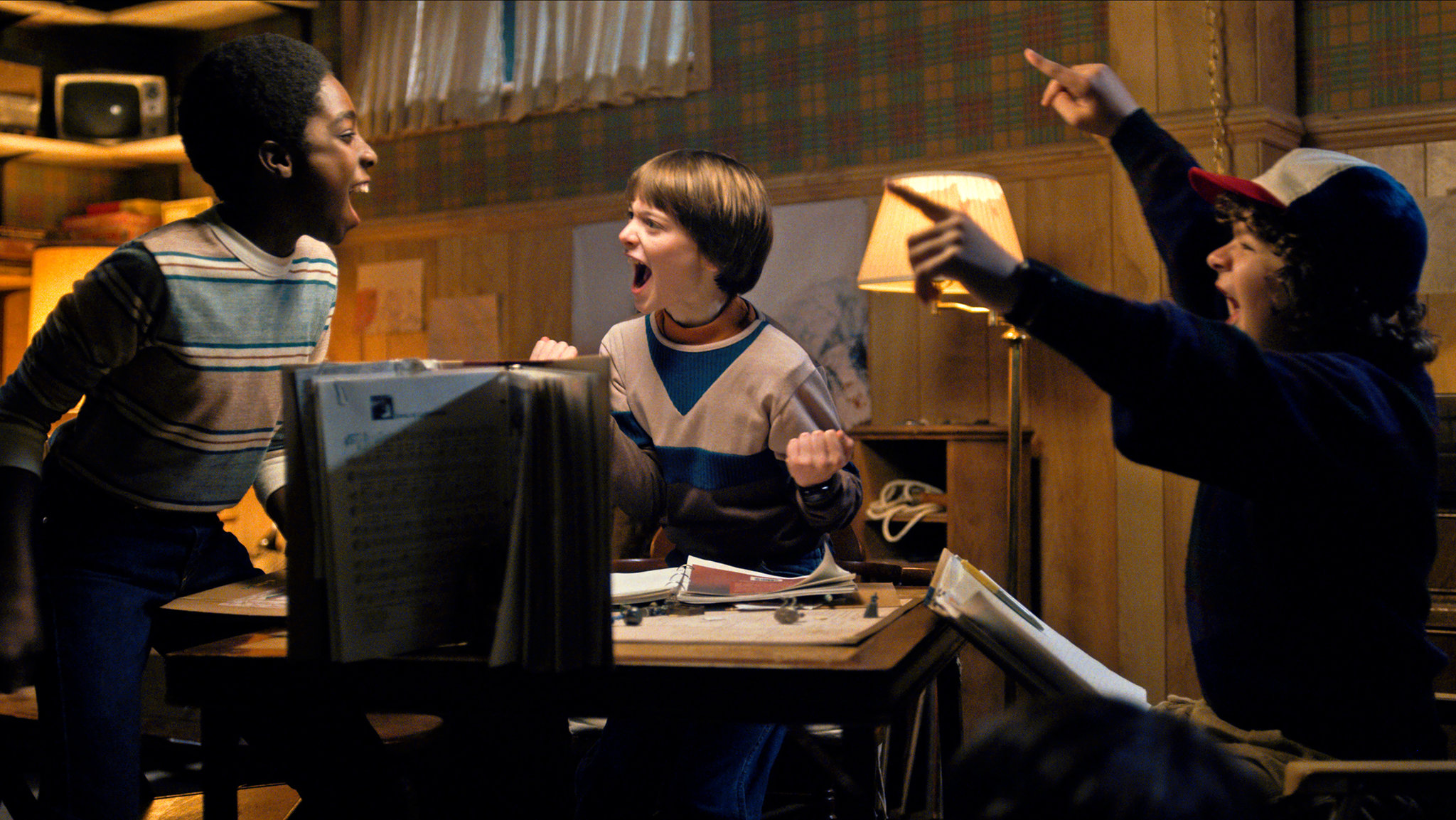 We’re now several weeks into our Monday night sessions of dungeon crawling and I am completely hooked! I’ve met new friends, learned the basics of the game and been expanding my problem solving imagination. We play on Roll20, a website geared for online tabletop and role-play games. Whilst I can’t pretend I’d have had any clue how to set up our campaign or run the sessions as a Dungeon Master, I’ve been lucky to join some more experienced players who have been happy to show me the ropes.

Something I didn’t expect, is that Roll20 enables you to see the dungeon or location your exploring and allows you to move your character through the environment. Whilst it’s fairly simple in it’s graphical style, it just adds so much to the fun. Creating and getting to know my character and his abilities has also been a source of great joy.

Engelbert Bramble Tamer, my Druid Gnome is curious, at one with nature and now able to transform into a handful of animals. He was a wolf in our previous session.

…that’s him at the top of the post there, I made a quick doodle. If you’ve been thinking about trying DnD yourself and are still unsure, let me encourage you to go for it! If you don’t know people that play already, I believe you can find new campaigns to join on Roll20. There are also lots of great online resources to teach you the basics and help demystify the rules. You might find your first session a bit overwhelming, I was unprepared and quite confused – but stick with it and you’ll soon find yourself drawn in to this vast, magical world!

Screenshot from Roll20 Campaign and Stranger Things image used here without permission. Drawing of Engelbert is my own!

I’m trying to get better at posting little flashbacks to some of my favourite, client design projects….the reason being that these projects were so enjoyable, creative and fulfilling, that I would love to attract more like them!

A little while ago I had the pleasure of working with Imperial College London to design ‘Sickle Buddy’, an app created to help children who suffer from Sickle Cell Disease. Through colourful illustrations and fun interactions, young patients can learn more about the disease and discover new ways to look after themselves and manage their symptoms which can be painful and frightening at times.

I created the app’s UX, UI, Illustration and character design work and had lots of fun doing so! It meant a lot to me to be able to work on a project that could potentially help young sufferers and offer some comfort and relief through play.

If you’re in need of a freelance digital/games designer for a similar project, I would love to hear about it! Or if you have suggestions for similar apps you have enjoyed or found useful, then do please let me know.

You can download the Sickle Buddy app here on the Google Play Store. 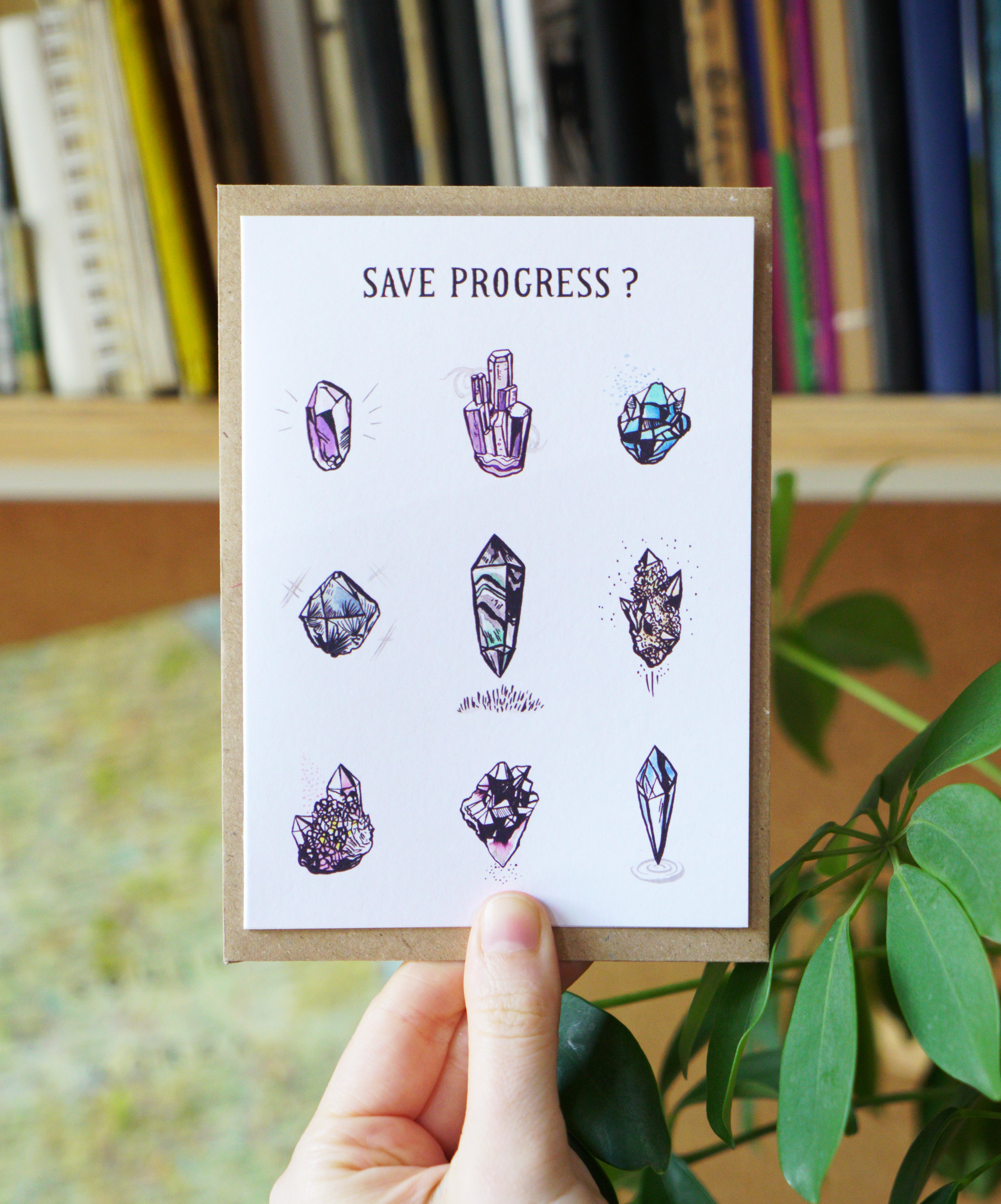 I am indeed counting down the days to the 10th of October when I’ll be launching the Owlstation Store on Etsy! It feels really good to be at this point and to finally have a home where I can share my products and illustrations with you all, such as my ‘Save Progress?’ greetings card.

Having grown up with retro PlayStation games like Final Fantasy 7 and Tomb Raider 3, I got used to saving my game’s progress by seeking out ethereal Save Crystals…I thought it would be fun to make a card that lets you and your friends save your life progress whenever you need to! Be sure to pop back in 8 days time when I’ll be sharing my store link, hooray! 😀

It feels like years since I’ve gotten lost in a console game. As I’ve gotten older and life has gotten busier, my gaming adventures (and game design work) have tended to take place on mobile or desktop. A train journey here or flight there being the perfect time to explore a new story or world. But the ritual of setting up the Playstation and telly, getting comfy on the sofa with friends and settling in for an evening’s session has been something missing from my adult life…until now!

It seems odd that my brother and I never got round to playing Zelda together as kids (we were very focussed on Final Fantasy) but I always suspected it would be something I’d enjoy. This year the planets finally aligned as my boyfriend Adam decided to set up The Legend of Zelda: The Wind Waker on an emulator.

At first I wan’t entirely sure about the strong primary colour palette and chunky 3D characters, but after an hour of gameplay I was addicted. As we’ve explored the vast ocean world i’ve grown accustomed to the simple visual style and been impressed by how many emotions a small number of polygons can trigger. Sailing in our little dragon boat over stormy, rain-whipped waves, I’ve felt glad to be safe inside our living room. Creeping in the shadows of an enemy’s lair to avoid their searching spotlights has had my heart rate climbing…

It’s lovely to slowly learn the language of a new game again. How do I jump? What can I smash? How many weapons might there be?…Beginning to uncover it’s depth. When you first play a game you’re unsure if it will all be over in three or four missions, realising that the map is much larger than you thought and the path to the final boss is by no means clear is just so exciting! And as it turns out, there is plenty to do in Wind Waker.

Some bosses have had us stuck for hours, straining our brains to work out clever ways through only to realise it was a completely logical solution  all along (usually centred around the last weapon or item we’d unlocked).

The UI and UX can be pretty frustrating at times. Having to repeatedly open and close the menu to equip items into slots is quite fiddly. The level maps are often scantily basic too…however the game’s charm more than makes up for this. Then there’s the evocative music, which coincidentally is a great soundtrack to work to! Crawling through giant shells, edging around perilous cliff faces, launching into the air with a leaf parachute, it’s just so good to get lost in a console game again!

All Zelda images gratefully borrowed from the internet and used here without permission.