My brother Mikey and I have teamed forces again to create ‘The Last Expedition’ a text adventure game set in a frozen, dystopian future. Well, Mikey built it, wrote the story and composed the music for it, I just created the background art! It’s a work in progress (so a few bugs and unfinished sections) but I was excited to share how it’s come together…

Inspired in part by the Global Seed Vault in Svalbard and Arctic exploration, the story asks you to follow in the footsteps of a young, female explorer who has ventured onto the frozen wastes in hope of finding the now mythical landmark. As the adventure unfolds you are presented with choices about which icy paths to take, faced with decisions to make camp or push on risking frostbite and given the opportunity to investigate long forgotten structures.

Created during lockdown for Mikey’s final University project, it brought us closer together at a time when geographically we were quite far apart. Looking back at that time now, I realise just how special it was. We checked in on Skype every morning to discuss next steps for his compositions or coding. Briefly catching up on the news before checking our schedules and planning his deadlines. It gave me structure and emotional support in the midst of all that fear and uncertainty. Plus it was the most time we’d spent ‘together’ in years.

Though the game is a work in progress that we would both like to develop further – I’m very proud of what we achieved so far. You can listen to the entire soundtrack on Mikey’s Soundcloud page too, but here’s a taster from the Archive Facility…

If you like mystery, dystopian futures and ice, check it out! You can play The Last Expedition on Share My Game here. Don’t forget to wear headphones!

Though my brother and I both live in London, we don’t always get to hang out as much as we’d like – so when we get the chance to collaborate on a creative project and share our different skills to help each other out, it feels really special!

Mikey Parsons is a talented composer studying his final year at Trinity Laban in Greenwich. You may remember that he worked with me a couple of years back to create atmospheric, chilling soundscapes for my Shackleton Illustration project with the Drawn Chorus.

He’s especially skilled at creating music for video games and as is hoping to enter into the industry when he graduates. As such, he had asked me to design him a logo that would help to represent him across social media and beyond as he reaches out to new contacts…

I begin most logo projects by creating a few pages of loose, quick experiments. I like to keep these playful and experiment with ideas, shapes, letters and textures to see if any interesting patterns or compositions begin to emerge.

Mikey draws lots of musical inspiration from magical games like Final Fantasy, from adventure stories such as Lord of the Rings and the Harry Potter universe. Luckily our sibling interests align, so I was able to have lots of fun playing with dragon motifs and magical emblems.

For all of my logo and design projects, key moments are built in for the client to review and feedback on the work I’ve completed. This is important to make sure that the project develops in the right direction. Mikey selected a couple of his favourite directions from my experiments and I took these forwards to the next stage.

We were both quite taken with a small logo mark I’d drawn, in which each letter of Mikey’s name had a symbolistic feel to it. With the lead letter ‘M’ appearing to dissolve away as if made of magic particles. I took this design into illustrator and started to refine each letter.

Throughout the process, I shared design updates with Mikey. We’d identified quite early on that he would also need a reduced version of the logo that used only his initials. This would be used for social media profile images and read better when viewed at a smaller size. I developed this version in parallel to the larger logo to make sure both felt like they belonged in the same magical family!

I really enjoy working on logo designs for other creatives. It’s always a fun challenge to take their ideas, inspirations and personality and find a way to turn it into a beautiful logo that helps represent who they are and what they do.

Be sure to check out Mikey’s awesome music and check back for more design project posts from me in the near future!

Here are a couple of little colour studies I’ve made as part of my research kick off for my next project with The Drawn Chorus. Super excited to be collaborating with them again! I call these colour studies…though I’m not sure if that is the technical term for them. The idea was to quickly and freely get down a range of colours and compositions to help me loosen up and get inspired around their exhibition theme. The first is a still from a Tomb Raider game, the second a campfire on a snowy mountain. More on that in the coming months! 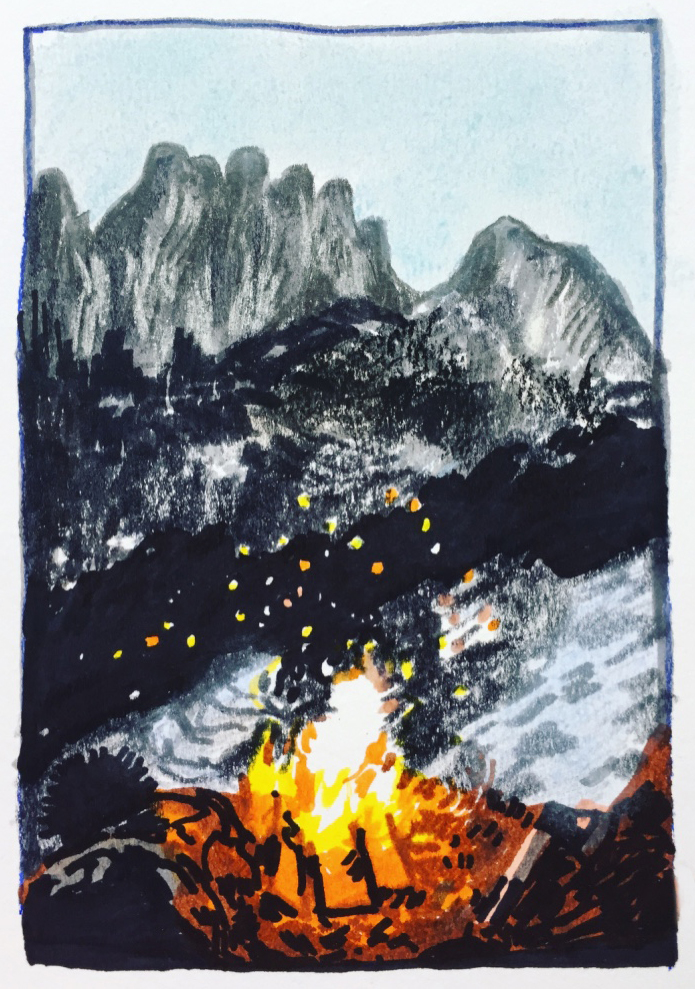 It’s January and the start of a shiny new year already, it hardly seems possible! Before I get stuck into my new year drawlutions (drawing – resolutions, anyone? Oh dear..) I wanted to have a quick look back at December and 2015. The ‘Easy As’ show was a lot of fun. Seeing everyone’s beautiful alphabet artwork displayed together was brilliant. With a real mix of styles, colour and approach from each artist.

Meeting and collaborating with the talented Drawn Chorus Collective was a great experience. On a personal level it was lovely to be exhibiting again and creating a piece that would have a physical life. Whilst I love working on games and apps, it feels great to see my work printed and framed up every so often. In case you missed it, here is my illustration ‘L for Lepidoptera’ and some photos from the private view. 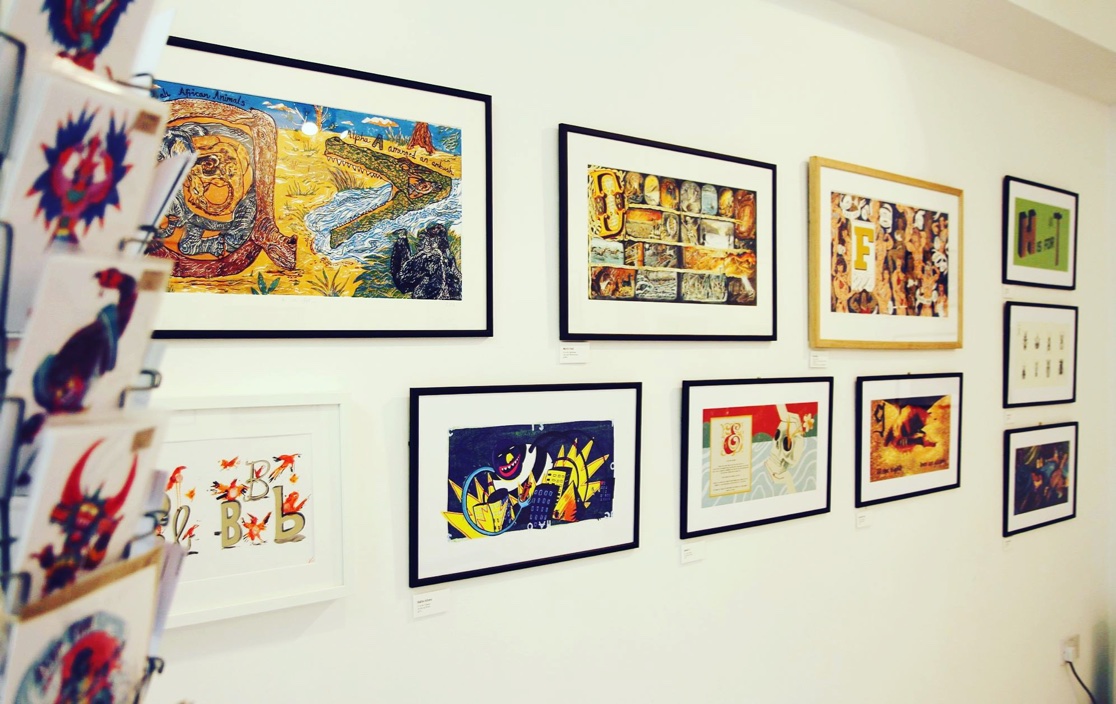 I was lucky to work on some fantastic digital projects in 2015 such as Silverpoint. I got down to lots of sketching; including my Devon holiday and recent trip to Edinburgh (more on that soon!).

Moving from Brighton to London was a big change for me. It wasn’t until the tail end of the year that I really started to feel settled and get a feel for my own place in what can sometimes seem a daunting and isolating city. I now feel i’ve found my feet and am thrilled to be in such a happening space, with so many gigs, exhibitions and heaps of culture, plus meeting lovely people to boot. 2016 here we go!

Living with a super talented writer definitely has its perks, for example you can get them to spell check blog posts, sense check C.V.s and on very special occasions (and if you make them lots of tea)  write short stories inspired by your doodles! I gave Carachan this sketch of a skull I drew at Harry Potter world and she wrote this very cool short story in response. WARNING: contains heavy traces of fantasy. 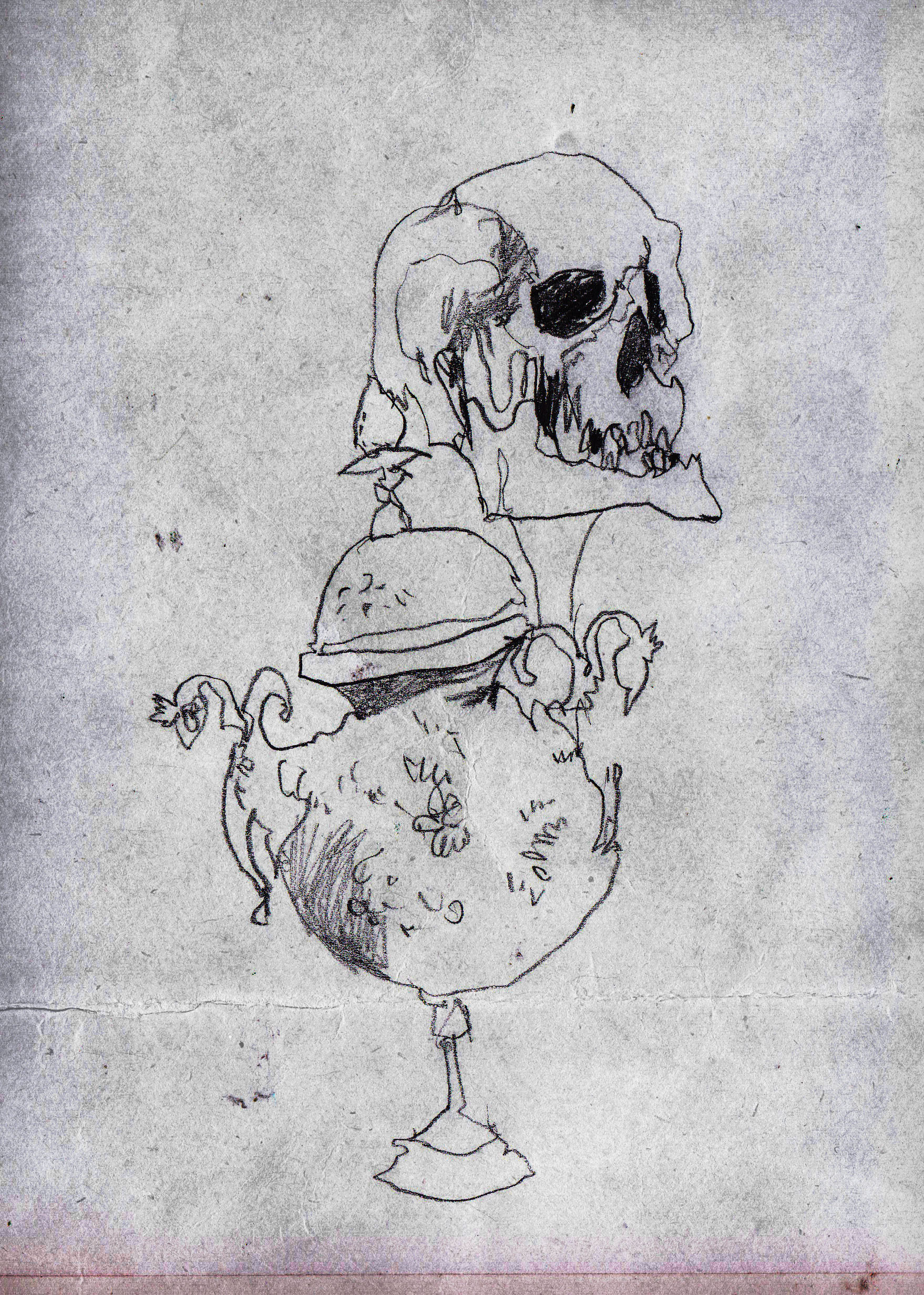 Two flaked knuckles; a knock and then she leaned heavy, the knots in the woodwork held her like a hesitant relative. Breaths caught between her collarbone. A little saltblood crept down into her vision, impish. As the oak yawned open she hesitated and her shell of armour hit the floor. The clamour vibrated up the winding staircase, the swearwords crisply scratched mortar from in between the floorslabs.

“Well, you are leaking something that looks similar to the lovely Merlot I opened last night, my dear armoured gentlewoman,” said the wizardess, smothered in her own glee. She stood looking down at the blood seeping into a dented shoulderplate.

“I should think,” the wizardess crinkled, “that you would have some coin, as clearly a mercenary would have.”

The warrior nodded, attempting to push all injury back into her body in a small squeezing gesture.

Casting aside her brown cloak, bleached in places one assumed by incredible experiment, the old woman slowly relieved the broken body’s belt of a purse and went about moving trinkets around.

The mercenary rolled over and looked up: the vast tower stretched up into arches and spirals; every step on the staircase had some odd trinket, on tables and chairs and loveseats a pile of gilded books in some strange languages, fluffy quills in apothecary jars, a tankard with some coat of arms, stuffed ducks, a glass buoy on a string, brass containers with regal handles. Countless mouse skeletons pinned to a board, a strange beast’s wing was nailed to the south wall stretched out like leather. Even the long velvet curtains, opened to show the glittering dawn, had a collection of ultramarine dragonflies pinned into them as if they were to make constellations.

The wizardess hoisted the broken body onto a table, tutting at the shout of anguish, and began removing armour.

The mercenary stretched her head to look away from the awful sight of her own flesh. The hollow black eyes of a human skull looked back from its perch on the windowsill. It grinned.