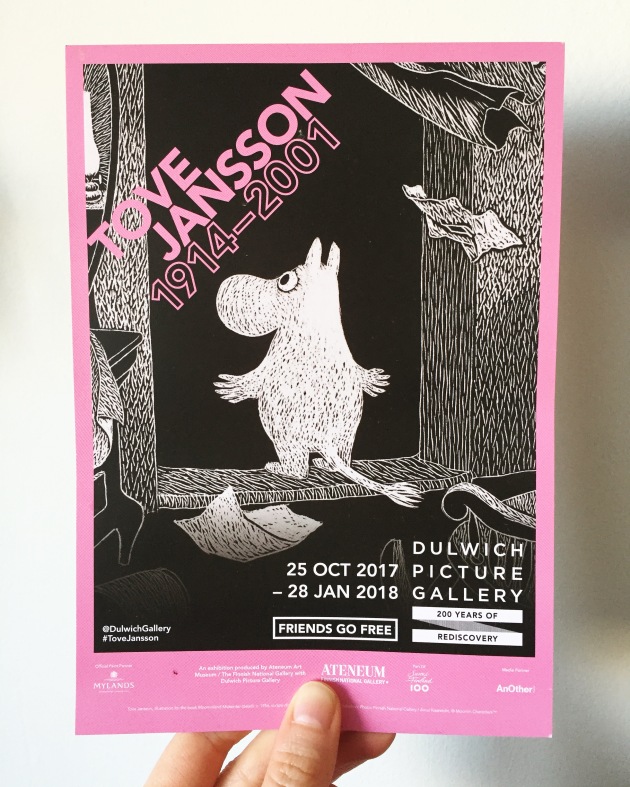 As a long time fan of Tove Jansson’s illustrations, seeing the exhibition at Dulwich Picture Gallery before it closed was a big treat. Though the Moomins took centre stage, there was an excellent variety of her work on display.

Watercolours and drawings from Tove’s illustrated versions of Alice in Wonderland and The Hobbit. Large oil-painted self portraits and abstracts. Also a selection of her political cartoons and magazine covers, some of which were created during the Second World War. There was even a series of models, like this one of Snufkin (below) that I took the opportunity to sketch! 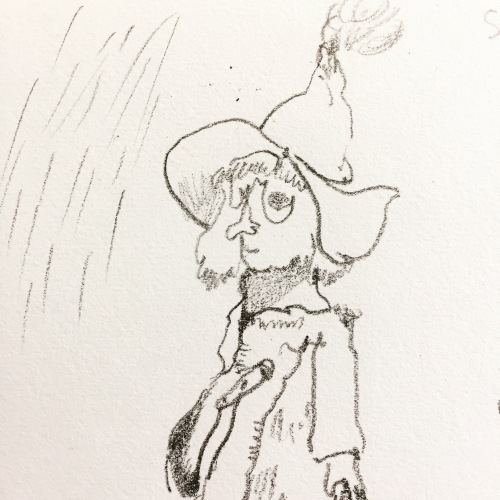 However, what I enjoyed most about this exhibition was the touch of insight it gave me into Tove’s creative process. Evidence of pencil lines not quite rubbed out underneath delicate ink work. Some barely perceptible tippex-like corrections on typography. Roughs and layout sketches shown next to final versions. I noticed that a few of the watercolours had sections which appear to have been carefully cut out, perhaps by scalpel, and removed or replaced with a new layer of card fixed precisely in place over the top. 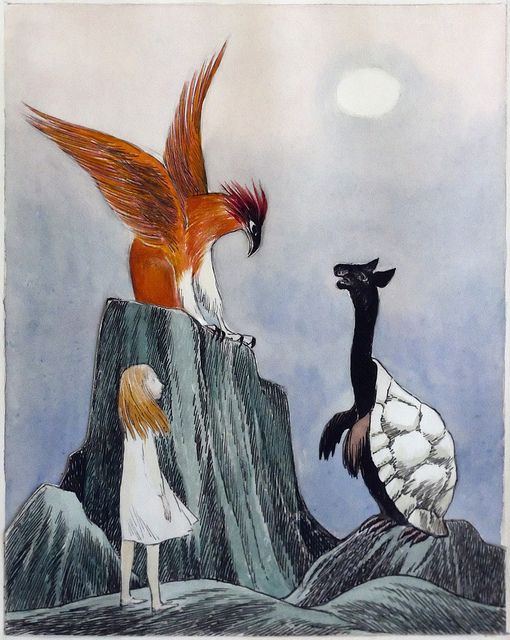 It was very heartening to see these little human touches and imagine that even my illustration heroes made/make changes and tweaks to improve their work. That things don’t always come out perfectly first time and that there are many different ways to create. It’s all part of the process and one that we don’t always get to see – especially in today’s slick, Photoshop world.

I love it when illustrators share what goes on behind the scenes and how they make their work. I’ll be sure to share more of my creative process this year too!

The above Tove Jansson Illustration from Alice In Wonderland is used here without permission via Pinterest.

I’ve been doing a touch of self-initiated research into Tove Jansson the Finnish Illustrator and Artist who created the ever popular Moomin. I’ve been a fan of her distinctive style for a while; always able to recognise one of her drawings and constantly spotting new pieces of Moomin merchandise in Brighton boutiques. But until recently I knew next to nothing about her.

After watching the brilliant BBC documentary ‘Moominland Tales, The Life of Tove Jansson’  I learned that her life had been tumultuous. At times, the Jansson family struggled to cope with their Father Viktor’s drinking and infidelity. She drew political comic strips during The Second World War and was deeply effected by the tragedy and violence of the period. She fell in love and had relationships with women at a time when it was still illegal to be homosexual.

When she created the Moomin family, Tove would sometimes use them as a way to deal with and work through the difficulties of the real world. Telling stories in a far off, made up land where evil and fear take the form of apocalyptic comets, giant volcanoes and shadowy monsters.

Not only an Illustrator, Tove was also a writer and fine artist. She created paintings and wrote novels and short stories though these were eclipsed by the fame that Moomin brought her. However being in the spotlight did not seem to suit her and she chose to live a hermit like existence with her partner Tuulikki Pietilä. They spent much of their time on Klovharu; a beautiful little island hideaway, lapped by waves and covered in flora and fauna that must have inspired and fed back into her illustrations.

Shimmering pools, murky forests, bright eyed creatures. Tove has several different artistic styles and she is a master of each. There are her highly detailed ink drawings, made up of tiny lines and dots. Her Moomin paintings which I think must be water colour and are soft and blurred, often rendered in pretty pastel colours. There are lots of flat coloured prints too. I don’t know if she created these herself or if they are the result of reproduction and publication but they are often highly patterned and made up of just a few strong colours.

Her work is magical, pretty and moving. The Moomin world is full of life. There’s something in the expression of these characters which allow people to connect with them and believe in them in a way that not all illustrated creations can. Perhaps this is the reason they are still around today, gracing lunch boxes, socks and satchels!